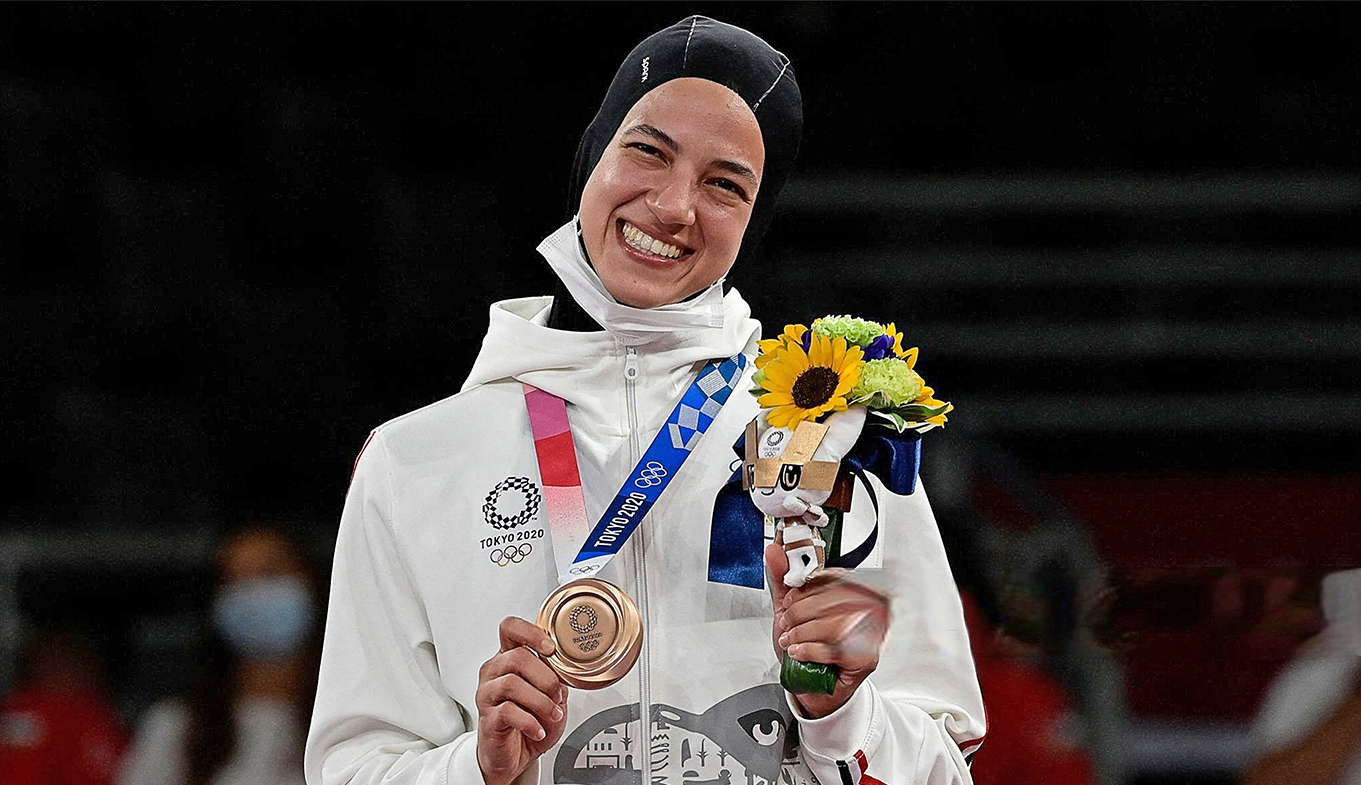 The 28-year-old Malak had won her first taekwondo medal in the -57 kg weight category at the 2016 Rio de Janeiro Olympic Games, and then she won the same bronze medal again, but in a higher weight category, the -67kg.

The Egyptian queen of the taekwondo mat is a graduate of the faculty of fine arts, cinema and theatre design from the Egyptian Helwan University. She got married after her remarkable achievement in Rio Games. Everyone thought she’d retire and focus on her personal and marital life, but she stunned them by gearing up for the 2020 Olympic Games, and winning! She went on knocking down her opponents one after the other until making it to the podium and claiming the bronze medal.

It has been almost two decades since the bronze medalist took on taekwondo as a professional sport. “It was in 2001 when I started— in the Shooting Club— with Wael Mahran as my first coach to train me and I joined the national team in 2009.”

She shares her most difficult challenge on the buildup to the Olympic Games and the competition as well. “It was changing my weight category from the -57 to the -67, almost 10 kilograms, that meant starting all over again as I lost my -57 kg rankings. I had zero points when I shifted to the -67kg, it was a challenge to go into every competition in this category— national, regional, continental, and international events to create a new ranking.

“The second challenge was my injuries. I had many injuries by that time, and I was also abroad for almost a year, mostly training alone. This was a struggle especially as different coaches trained me… it was very difficult to adjust, and it took me some time to get acquainted with them.

“The other thing was the Covid-19 breakout at the end of 2019 which prevented us from training and going into training camps outside Egypt. We didn’t get the chance to compete with our peers anywhere for almost a year and a half before the Olympics because the sports world— like everything else— shut down.

“My first and last games were the hardest for me. The first was very important, winning meant proceeding and moving forward in the competition, and losing meant an early ‘bye’. In the final match, I played knowing that it is the final stage; so winning would lead to a medal and would make me a world champion, but losing would be a defeat, and I’d lose that medal. I had to hold my composure and take control of the game, and I have eventually won. 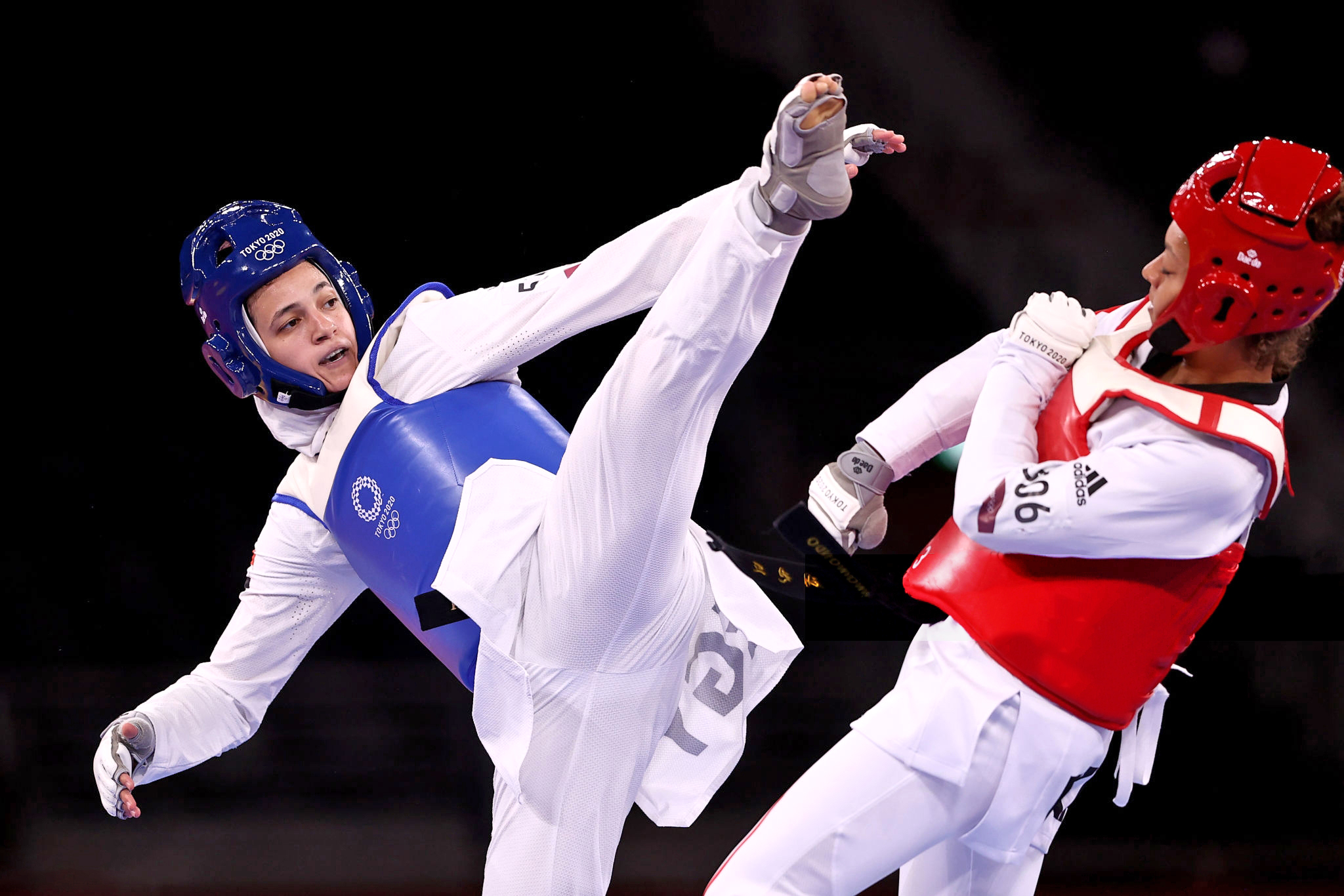 The two-time Olympic bronze medalist Malak offers her fellow sport beginners some tips to progress in the sport and make a name for themselves. “Well, first of all, they need to create a team of their own sport, whatever this sport is; a good professional coach, a fitness coach, and a mental health coach— because the mindset is very important for any athlete. They need to work hard, be patient, overcome any obstacles, accept that they can win or lose. They have to believe in themselves, love their sport, and give it 100 percent of their effort.”

When she won her medal, Malak’s first call was to her mother, her husband, and siblings; she even spoke to them live. “It felt great to share that precious moment on the spot,” she revealed.

To be honored by the Head of the State for one’s achievements is awesome, “and every athlete would do his best to win an outstanding achievement in order to receive such an official and presidential honorable reward.”

Any athlete needs a voice of confidence that would push them forward, and Malak got it from her brother Abdel-Rahman, her husband, and coach. “Those were the ones who believed in me winning another Olympic medal, despite that my results before the Games weren’t promising, which made me determined to win and meet their expectations. Actually, my family has always been supportive since I have started taking on this sport from the beginning,” she said, adding that the Egyptian media was supportive as well.

“The media was supportive and positive. I wasn’t following social media and therefore wasn’t affected by any negative comments— if there were any— because I usually close my accounts before major events, but I liked that they followed us.”

My sponsors, the National Bank of Egypt and Rawabt were my main sponsors and I owe them my achievements, without their support, I couldn’t have reached that level and for that, I am thankful.

Paris 2024 isn’t in Malak’s near vision at the moment. “It's too early to think or talk about Paris 2024. The past years have been very challenging, and meanwhile, I am off, I need to rest for a while and have a vacation without thinking about sports. When I‘m back, I would think about my next steps in the future,” the taekwondo queen concluded.