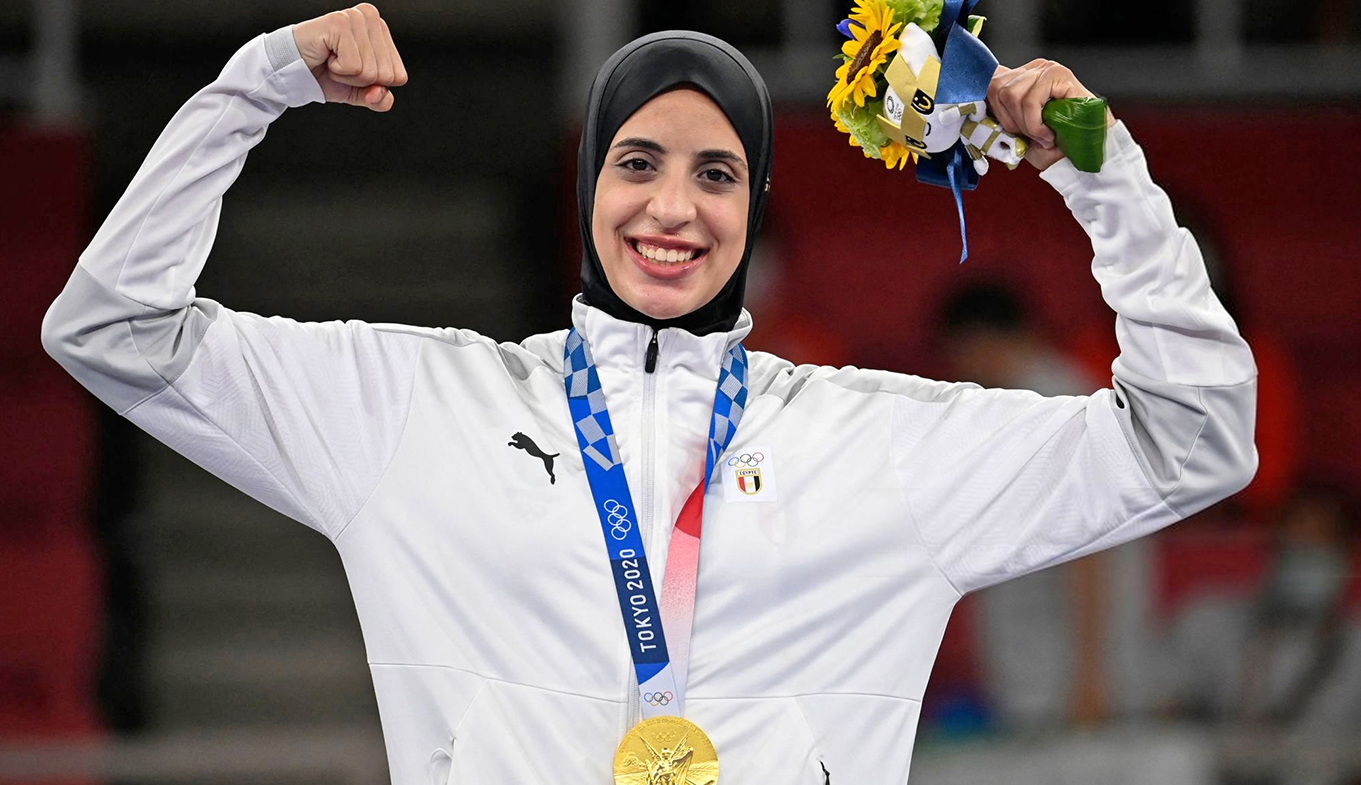 This athlete has just made a name for herself! A name that would live forever in the history books of Egyptian sports in general, and the sport of karate in particular.

Feryal Ashraf became the first Egyptian female athlete to win a gold medal in the history of the Olympic Games, and ironically, it might be her only Olympic medal ever. Karate was never an Olympic sport and has never made it in any of the previous Games. The sport was added to the Tokyo 2020 Olympics program, as per the request of the organizing nation, being a popular sport in Japan. Paris 2024 has officially announced their official program for the next Games, which didn’t include Karate.

The golden girl, who plays for the Military institution, is a senior student at the Faculty of Pharmacy, the British University in Egypt. “It’s my final year and I’m looking forward to graduating soon,” Feryal said.

Since the very beginnings of her sports career, she came to the spotlight and everyone predicted she would make a superstar one day, including her first coach, Hosni Abu Zeid. And indeed, that day has finally come with Feryal winning her first gold medal in the Olympic Games. But before that, the 22-year-old, who had joined the National team in 2014, had won other gold medals in several World Championships in Chile, Spain U21 in 2017, and the gold medal at the Girls’ championship. She has also won several gold medals in the 2018 Mediterranean Games, the Arab and African championships as well as the World League.

Just as her sports teammates, Feryal had also faced some difficulties in the build-up for the Olympic Games. “All athletes suffered from the Corona Virus, they either contracted it or had to isolate as sports were suspended all over the world, which affected everyone, especially professionals, but we managed to train in open-air arenas. Before the Olympics, I had a hamstring injury; it should have taken a maximum of three weeks to heal but stayed for three months instead. I had to take part in a tournament which made it worse. I wasn’t at my peak or even my normal level before Tokyo and it was because of the training overload I had to go through to catch up on my level. Honestly, the support from people around me made me enthusiastic and I managed to overcome my injury”.

Feryal showed appreciation to those supporting her. “Honestly, I believe that I have received all the support I needed from all entities, whatever I required for my training and participation in competitions to prepare for the Games. But besides the moral and financial support, I believe what is more important for any athlete is their determination, the will to win and fight for that. Athletes just need to keep an eye on their goals, ignore any problems, obstacles or hurdles, and just focus on how to overcome them in order to reach their target.” 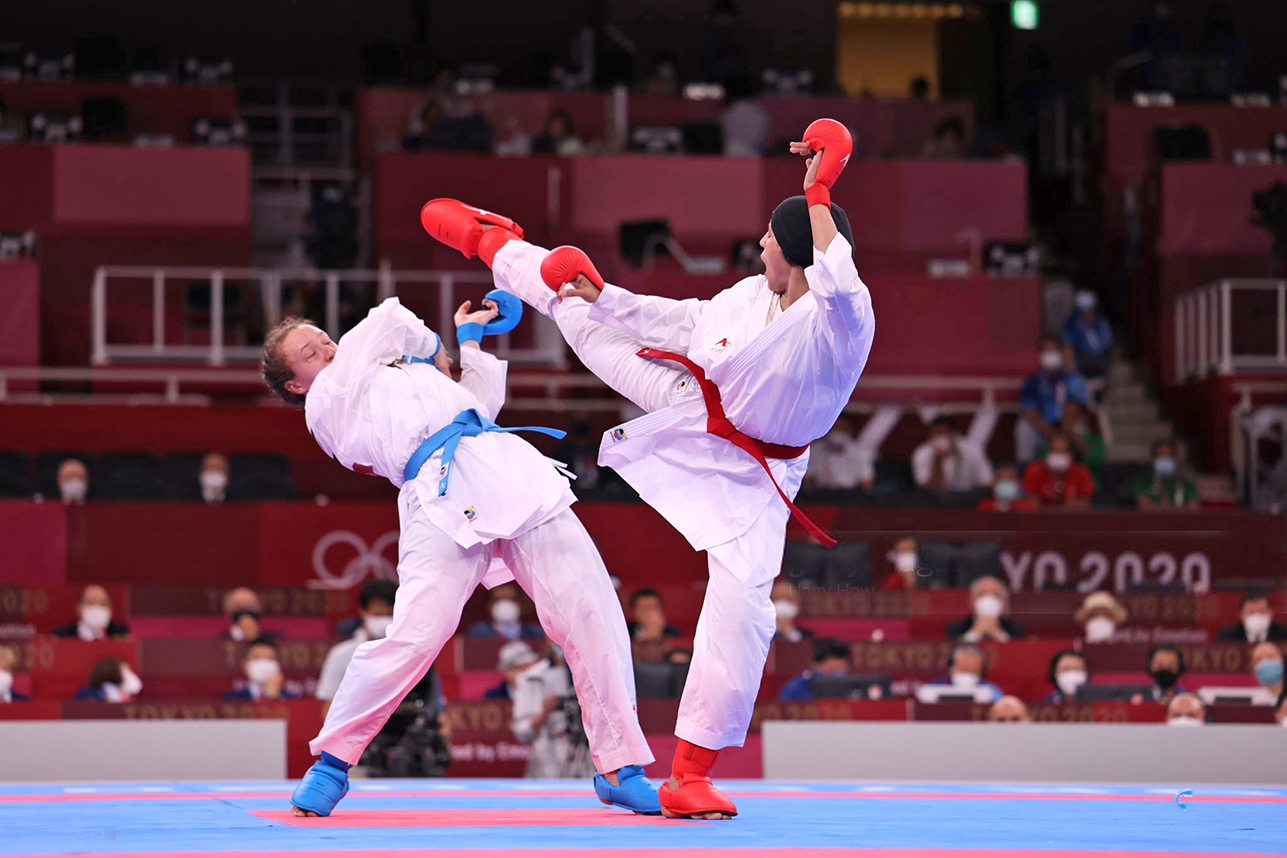 Feryal admits that her quest to winning the gold medal wasn’t paved with roses. “My group was very tough and the order of the matches was not the best. The semifinal game was the toughest and most challenging; the score between my opponent and myself was very close, the score kept moving up and down, until the last second of the game where I finally succeeded to clinch the victory 5-4 to my favor and make it to the final”.

The golden girl opens up and confesses that if time goes back, she would still select karate as a sport. “If it were for me, I would do the same, join the same sport, this is what I have always wanted, to reach my dream and thank God, I did it.”

Feryal’s achievement has made her a karate icon and a role model in her own sport for young karatekas. She offers all existing and upcoming karate players afew tips: Train well, love what you are doing, pay attention to what benefits you, and stay away from what harms you. Always work on yourself, and even if you face problems, make use of it, learn from your mistakes.

Following her astounding victory, Feryal surprised her mother by calling her to share her joy, but what she didn’t expect was receiving a call from the President of Egypt himself to congratulate her on her huge success. “I was stunned but honored and thrilled to hear from the President himself. He congratulated me and was very supportive. Then back home, the president honored us by meeting us and naming some main roads and bridges after us. Those gestures from the president are historical. Actually, since our return, we have been truly recognized and our achievements were appreciated.”

The karateka confessed that she feels blessed to have some people there for her all the time, showering her with all the support she needed and believed in her. “Most of the people around me believed in me; my family, coaches, friends, and all those around me, they believed I would do it, whatever I say about them, I will never give them the credit they deserve. Their faith in me inspired me to do my best, to be up to their expectations.”

Officially, Karate will not take part in Paris 2021 Olympic Games, which is a disappointment to the karate athletes. “We hoped we could participate in Paris so that we defend our achievements. Hopefully, it could be included in the 2028 Olympics, so Egypt can win more karate medals there.”

Egypt’s golden girl is thankful to the media for following the Games and keeping the athletes in the spotlights. “They did a great job in reporting everything about us, even before the Games. They highlighted our achievements, especially those of the winners. However, I didn’t follow social media because my accounts were off even before the Games. If there were any negative comments against the Egyptian delegation, I wouldn’t be concerned because nobody knows what we go through and face during our preparations or competitions, they can’t even imagine what we did to reach that stage and reach the podium,” Feryal Ashraf, the gold medalist concluded.