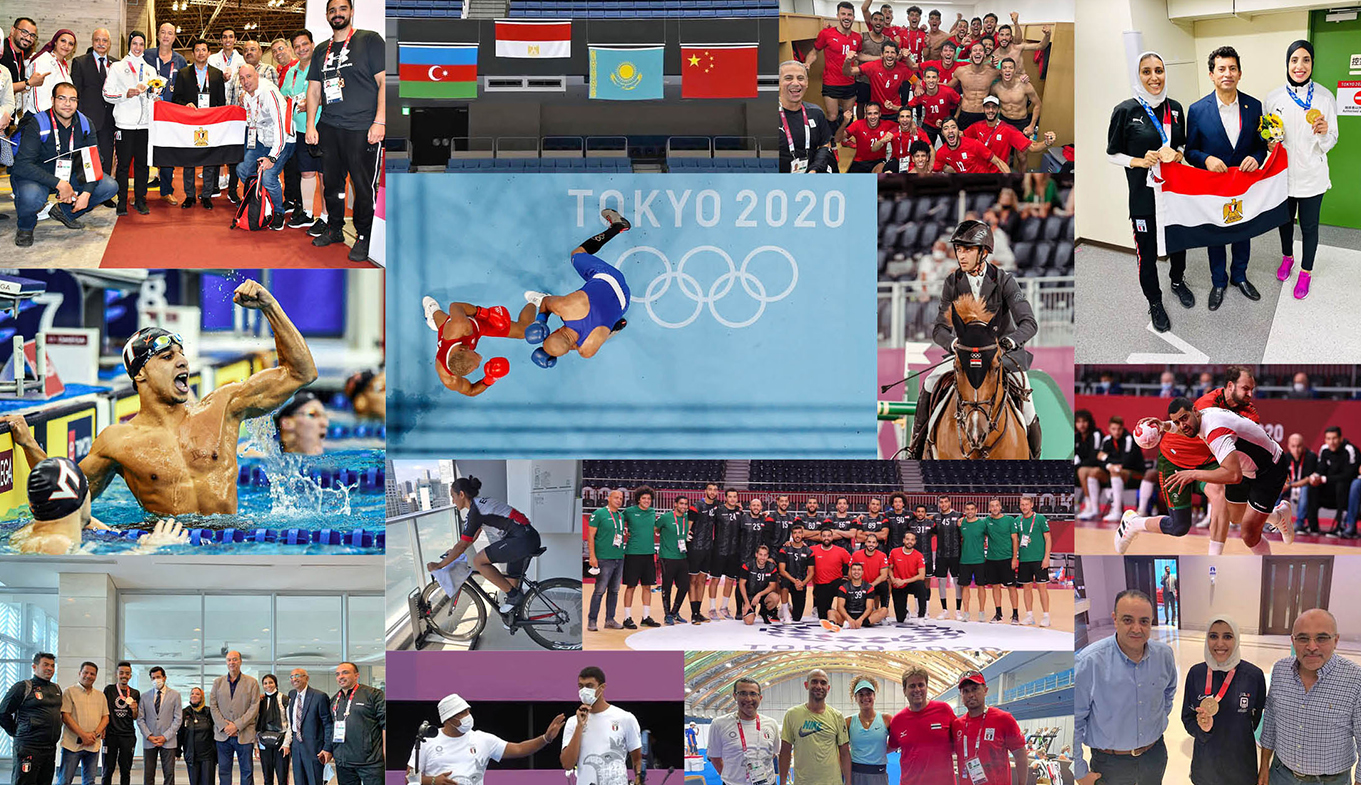 A year ago, before the Olympic Games, there were doubts and uncertainty about whether the Tokyo 2020 Olympics will be held. But, finally, the world’s most prestigious sports event was held with the whole world following the two-week spectacular and exciting competitions, as the world-class athletes displayed their best and competed for glory.

Just as it was Egypt’s highest delegation ever in the history of the Olympic Games, so was their impressive extraordinary first-time harvest of medals. The Egyptians have participated in the 2020 Tokyo Olympic Games with an unprecedented huge delegation of 134 athletes who competed in 23 sports. 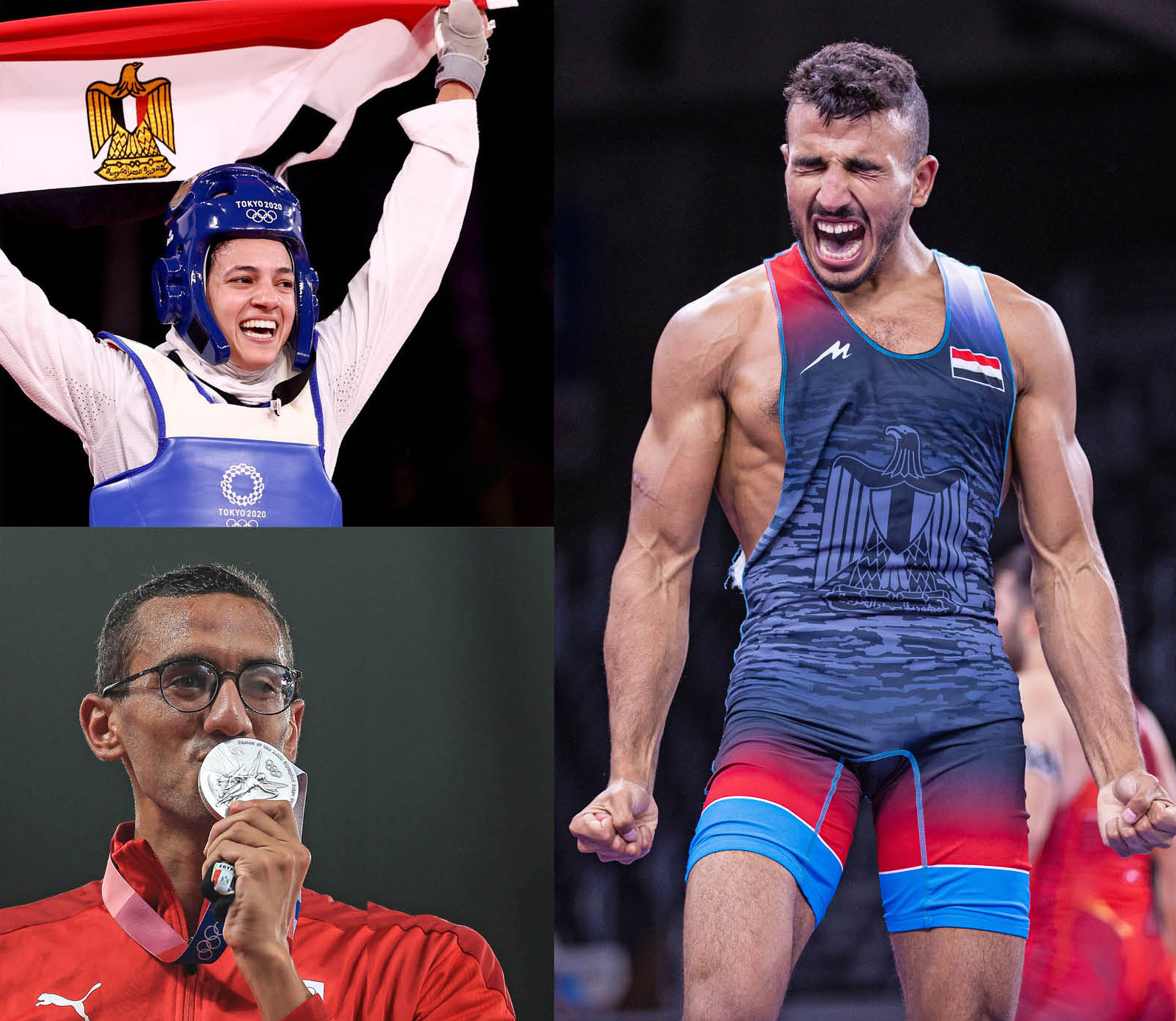 The Pharaohs were ranked 54 after achieving a total of six medals; a gold, a silver, and four bronze medals— three more medals than the three bronzes which were earned at the 2016 Rio Olympic Games. Egypt claimed their six medals in four sports; taekwondo, wrestling, karate, and modern pentathlon. The highest medals record in the history of Egyptian sport at the Olympics was five medals at three editions of the Olympic Games; The 1936 Berlin Games where Egypt achieved two gold, one silver, and two bronze; The 1948 London Games where the Egyptians claimed two gold, two silver, and one bronze; and the 2004 Athens Games with one gold, one silver, and three bronze medals.

The first week of the Games witnessed Egypt winning only two bronze medals coming from one sport, taekwondo, which has opened the score for Egypt and brought joy to the Egyptians back home. The medals were achieved by Seif Eissa in the men’s 80kg, and Hedaya Malak in the women’s 67kg. It was the second time taekwondo has won Olympic medals in two Olympic Games in a row, with Malak claiming a bronze medal in the 2016 Rio de Janeiro Games. 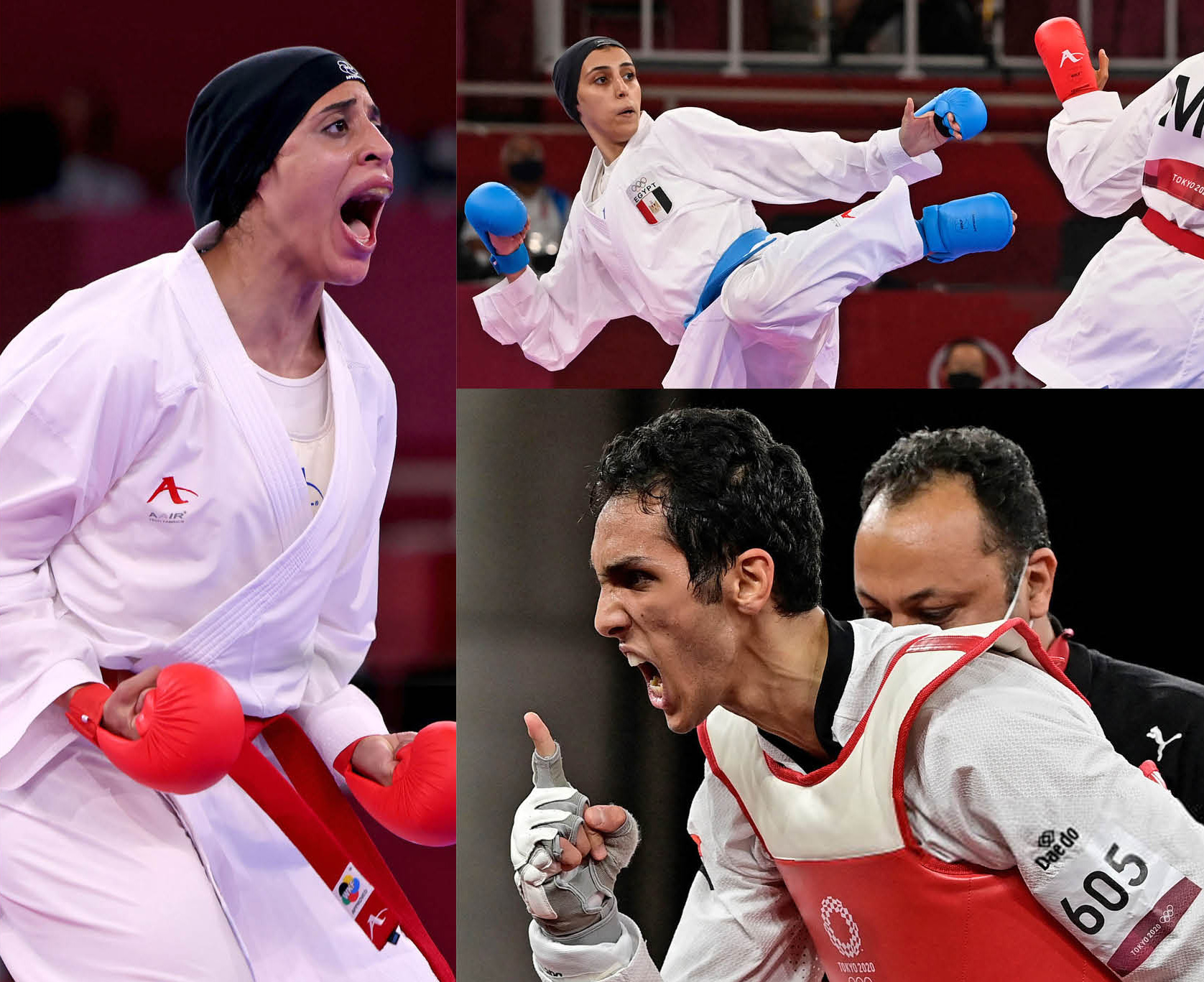 The second week went on and there were no signs of any medals. However, the Egyptian delegation in Tokyo and the Egyptians back home— who were glued to their television and social media outlets to follow their athletes— were praying and keeping their fingers crossed for more medals. Many hopes and expectations crashed to the extent of giving up and losing hope, until Mohamed Ibrahim Kisho claimed a bronze in the Greco Wrestler, followed by another bronze from Gianna Farouk in Karate, the sport which has joined the Olympic program in Tokyo for the first time.

The last two valuable medals, came with only one day to go for the conclusion of the Games when Ahmed El-Gendy claimed a silver medal in the Modern Pentathlon and Feryal Ashraf snatched the gold medal in Karate as well. It was Egypt’s first gold medal after 17 years. The last gold medal was achieved by wrestler Karam Gaber at Athens Games in 2004.

Egypt could have achieved more in Tokyo 2020 as many athletes were close to the podium, but unfortunately, they tightly missed it, especially the handball team who had made history by making it to the semi-finals. Unfortunately, they lost the play-off game for the bronze medal 27:23 to Spain for a fourth-place finish.

Wrestler, Greco-Roman Mohamed Mostafa was ranked 5th, so was the men’s Sabre fencing team, and Omar Assar in table tennis.

Fencer Alaa Abu-El-Kassem, the 2012 London Games silver medalist, was 6th in the men’s foil individual event, while his colleagues Mohamed Hamza and Mohamed El-Sayed came 7th and 8th in the Sabre event. 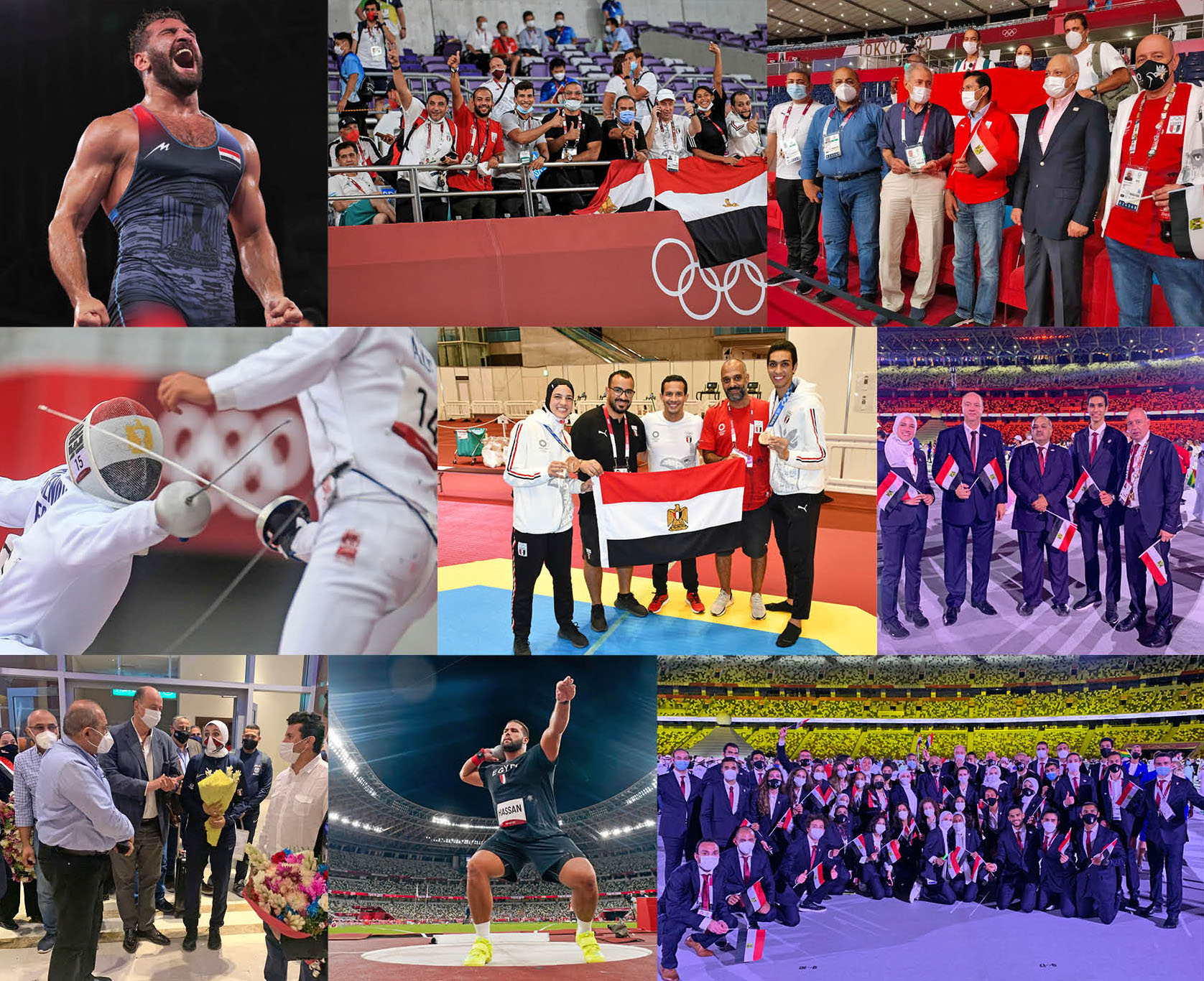 Two athletes and two teams were also ranked 8th in their sport; Mostafa Amr in the shot put, Abdel-Rahman Wael in taekwondo, the Fencing Foil men’s team, and the football team.

In gymnastics, Egypt made its first appearance in the sport’s discipline ‘trampoline’, where Malak Hamza secured 9th place, while her teammate, Asser Seif, came in 10th place.

Diver, Mohamed Mohayman, had also made an Egyptian record by ranking 11th in the 3m springboard diving event. While not making it among the top 12, other participating Egyptian athletes have improved their personal best records in their continent/country.

And in swimming, Youssef Ramadan set a new personal record in the 100m butterfly race, clocking 51.6 secs in the event.

The Equestrian team, who took part in both, the individual and team events, set a high record, reaching 11th place in the Team Jumping qualifications, and was so close to joining the top ten and progress in the competition.

Egypt’s Minister of Youth and Sports Ashraf Sobhy said that the country was so proud of all athletes; those who have won medals and those who were so close to winning ones.

“The athletes were great and did all their best in the competitions with the aim of standing on the podium or improving their Olympic, world, or national rankings and records. Most of them have actually done it,” the Minister said.

“We started preparing for the Tokyo Games very early according to the instructions directed by the Head of the State, President Abdel-Fattah Al-Sisi, who has called offering all the support needed to nurture, encourage, and inspire our athletes towards accomplishing their utmost performances and achievements. In January 2019, we launched our plan by assembling a scientific committee whose task was to set the plans required to ensure the qualification of more Egyptian athletes to the Olympic Games, while bearing in mind the challenges of the COVID-19 which emerged by the end of the year. This required tough and strict precautionary measures to be applied.

“Those unprecedented achievements for Egyptian sports were a result of years of serious and tough hard work during the preparation process. Financial and moral support was provided from the Egyptian government to all sports federations; first, during their qualifications tournaments in order to book their seats at the Tokyo Games, and second, during the pre-Olympics building up process. They have had all our support and we were following them and facilitating any obstacles they might have faced,” Sobhy added.

“Meanwhile, we are focused on the 2024 Paris Games, which is due in about three years’ time, this is why we need to start right away. The Ministry has designed a ‘comprehensive plan’ towards building up the ‘Talented Olympic Athlete Project’. We will work hard to assemble and gather the best athletes for the coming Olympic Games with the aim of accomplishing more Olympic medals in Paris 2024,” Minister of Youth and Sports Ashraf Sobhy added. 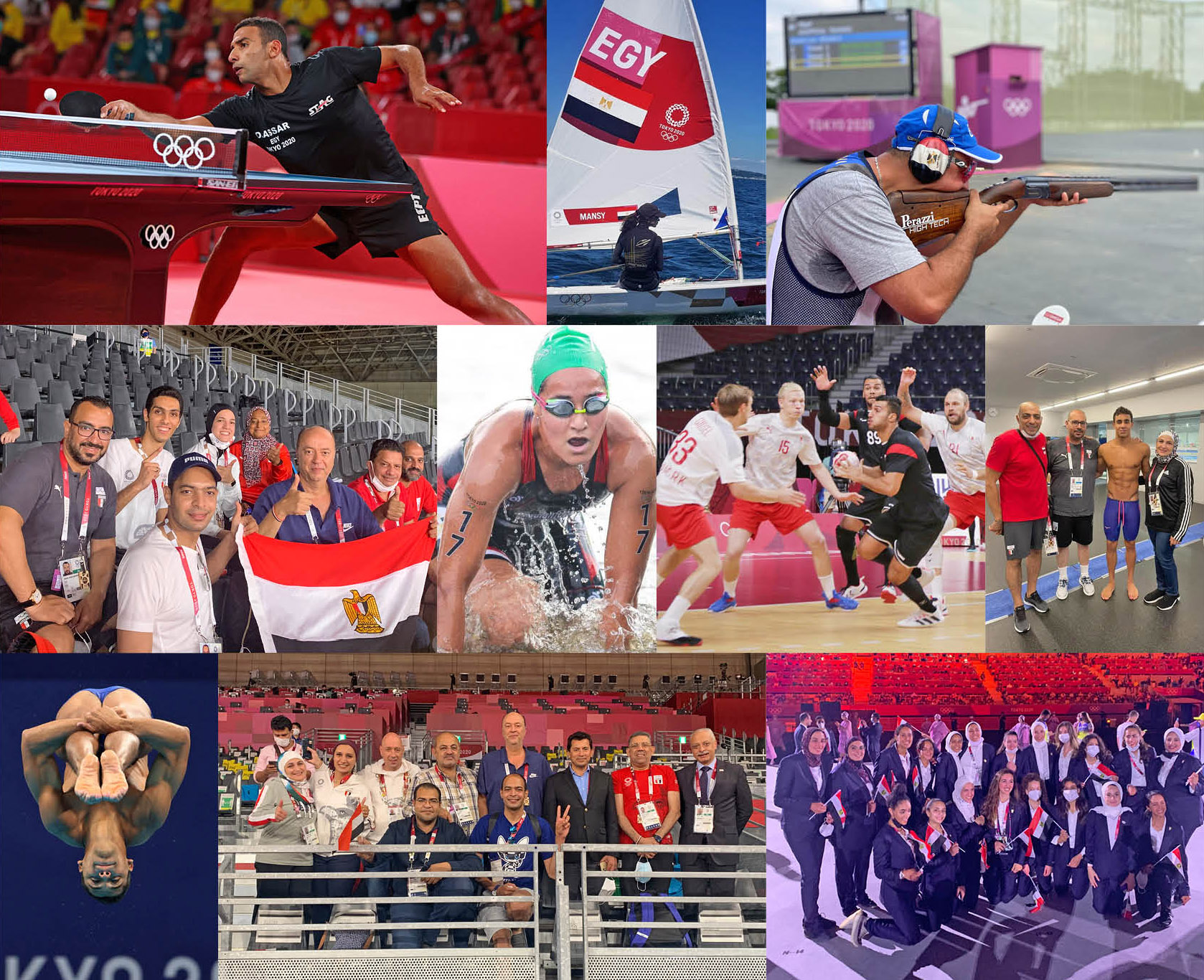 “We have won six medals and had 14 athletes ranked from 4th to 8th, as well as athletes who had reached the final stage in some sports like diving; which means that almost 25% of the participating athletes have achieved good and satisfactory results. We will invest and work on preparing those athletes for the next Olympics, Paris 2024. Now that they have had the experience of the Olympic Games, they have a chance to do better”, he said.

“We have a group of athletes who are almost ready for Paris Games, and we are applying the scientific methods in the building up process. Football is the most popular sport in Egypt and everyone is talking about it now, especially sports experts because we have lost to Brazil, who has later won the gold medal. I don’t think the football team’s result was negative, but they were unlucky to meet Brazil at this stage,” Hattab added.

Though Tokyo 2020 competitions had no spectators at all, yet it was the delegations’ team members, coaches, officials, and staff who served as supporters in the empty stands, cheering for not only their teams but for other neighboring countries as well— if they weren’t playing against them.

Despite the tough challenges and hard times and conditions that athletes all over the world faced while training for the Games, the Tokyo Games witnessed superb high-level performances, tough competitions, and vigorous sports spirit.

Altogether, 11,000 athletes from 206 countries have competed in the Tokyo Games at 42 venues around Japan, including the Northern Island of Hokkaido— which was chosen to host the final event, the marathon, because of its milder summer temperatures. Athletes competed in 339 medal events, representing 205 national Olympic committees, with one team made up of refugees.