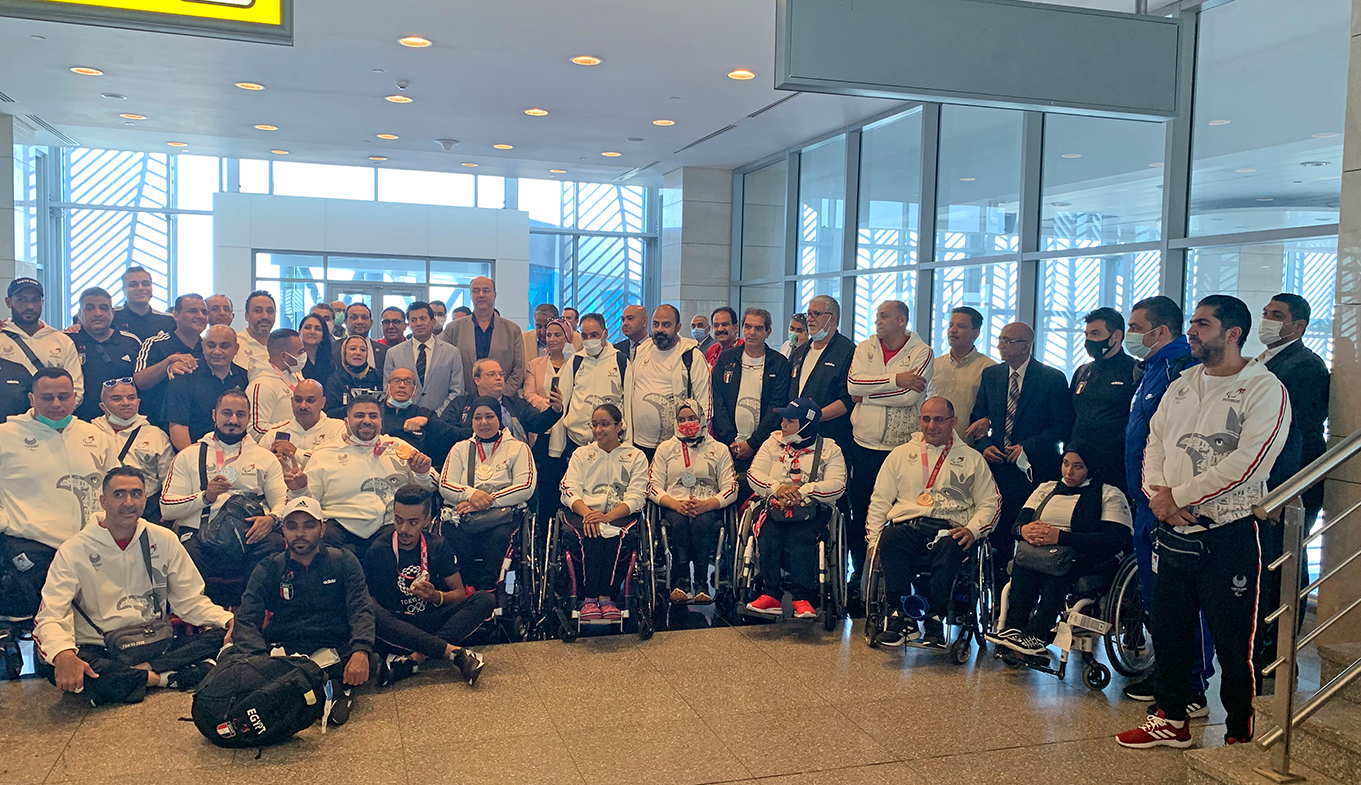 The Egyptian para-athletes had inspired the world, as everyone was following the Games on mainstream and social media platforms. Despite not winning a medal, yet, table-tennis athlete, Ibrahim Hamadtou, has been the talk of the Games, as he competed with determination, controlling the table-tennis racket's bat with his mouth. Hamadtou has stolen the hearts of millions all over the world, not only Egyptians.

The medals were achieved by: 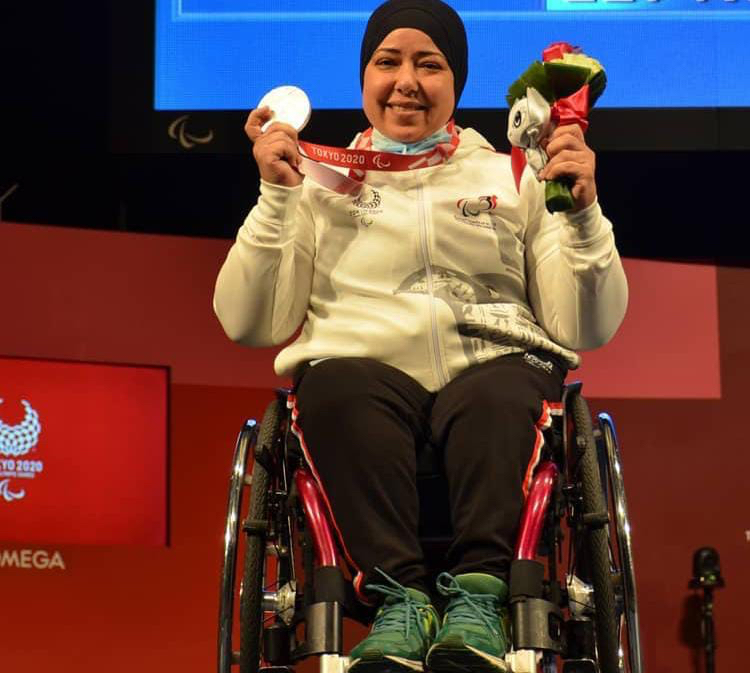 The 48-year-old champion is a mother of two daughters and considers sports as her main and only job. She started practicing powerlifting in 1994 and became a member of the national team three years later in 1997. She plays for “Telecom Egypt Club", and her first coach was Ayman Mohamed Ali. She has a record of 30 international championships, including World, Regional, and African Championships.

"Before the Games, I was injured in the neck which affected my left arm and had to take injections. I got the coronavirus twice in a month and a half, which made it difficult for me, so I won silver instead of my favorite gold."

The silver medalist, who made her first call to her husband following the victory, is glad about the reception and honoring of the President. "It made us feel equal to the Olympic athletes," she said. Fatma is meanwhile focusing on her physical and mental health to prepare for Paris 2024. 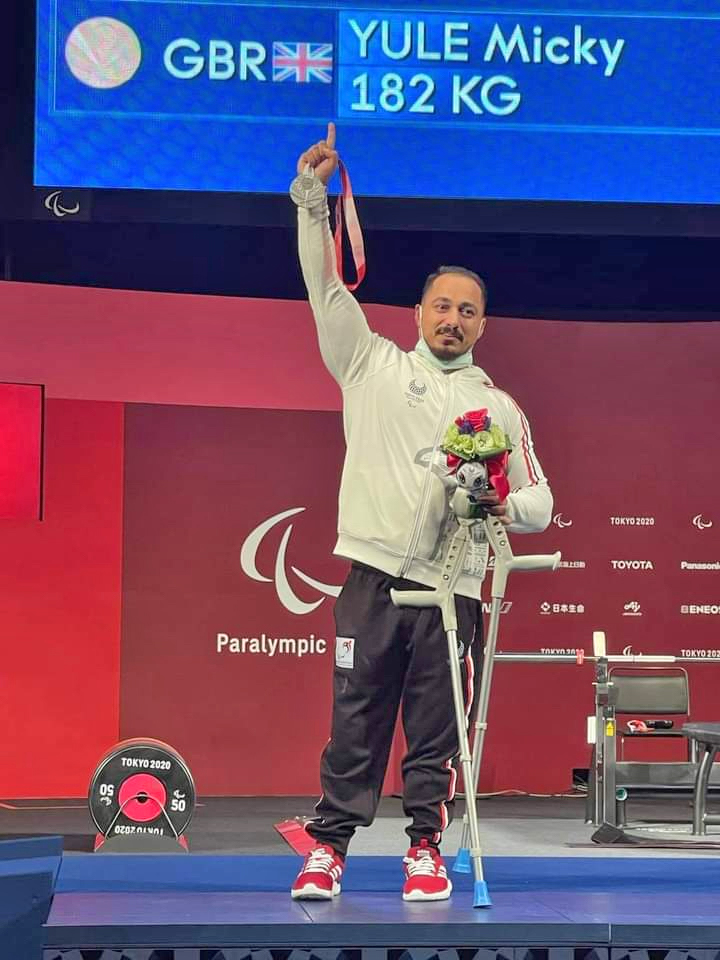 Mahmoud Sabry won his silver medal in the 72-kilogram weight category, after defeating his British and Chinese counterparts by lifting 185 kilograms in his first attempt and 191 kilograms in his third. The champion told the media that he didn't expect to win a silver medal, and was aiming for either a fifth place or competing on bronze, but was glad to finish second and receive the silver medal.

The 30-year-old plays for the "Telcom Egypt Club" and has been playing on a national level since 2011 before joining the national team in 2012, and her first competition was the Emirates Championship in 2013. "The competition was tough for us as we didn't have enough time to train because of the coronavirus. This affected our performance, and consequently, our records. Refereeing wasn't fair sometimes. My toughest moment was when I drew with the eventual gold medalist, who claimed the gold because she was lighter in weight according to the rules."

Like all other athletes, her family came first to mind. "I called my mother first before anyone to break the news. The reception at the airport from Egyptian officials, fans, and families, and the honoring of the president were so emotional. Next, we will be taking part in the Georgia International in November, the first step towards preparing for Paris 2024." 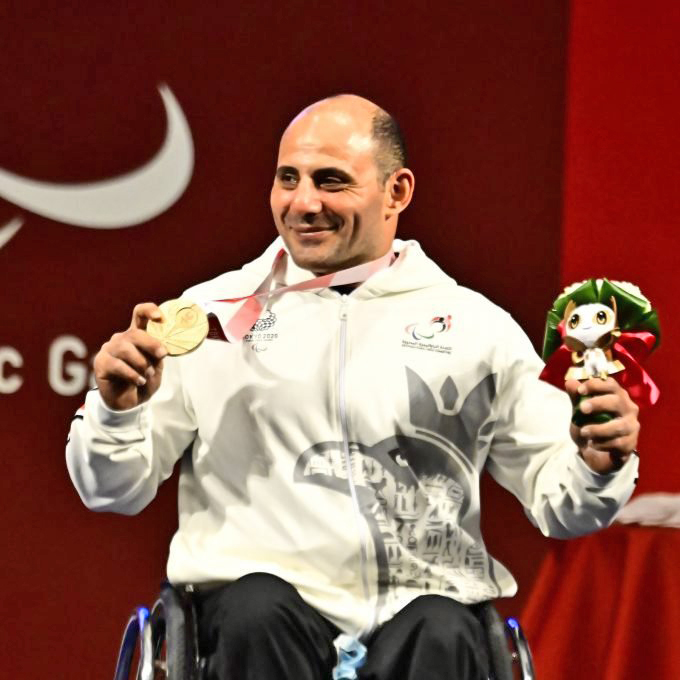 Mohammed Sobhy won his bronze medal in weightlifting in the weight of 80 kilograms. He managed to win his medal by lifting 212 kilograms. 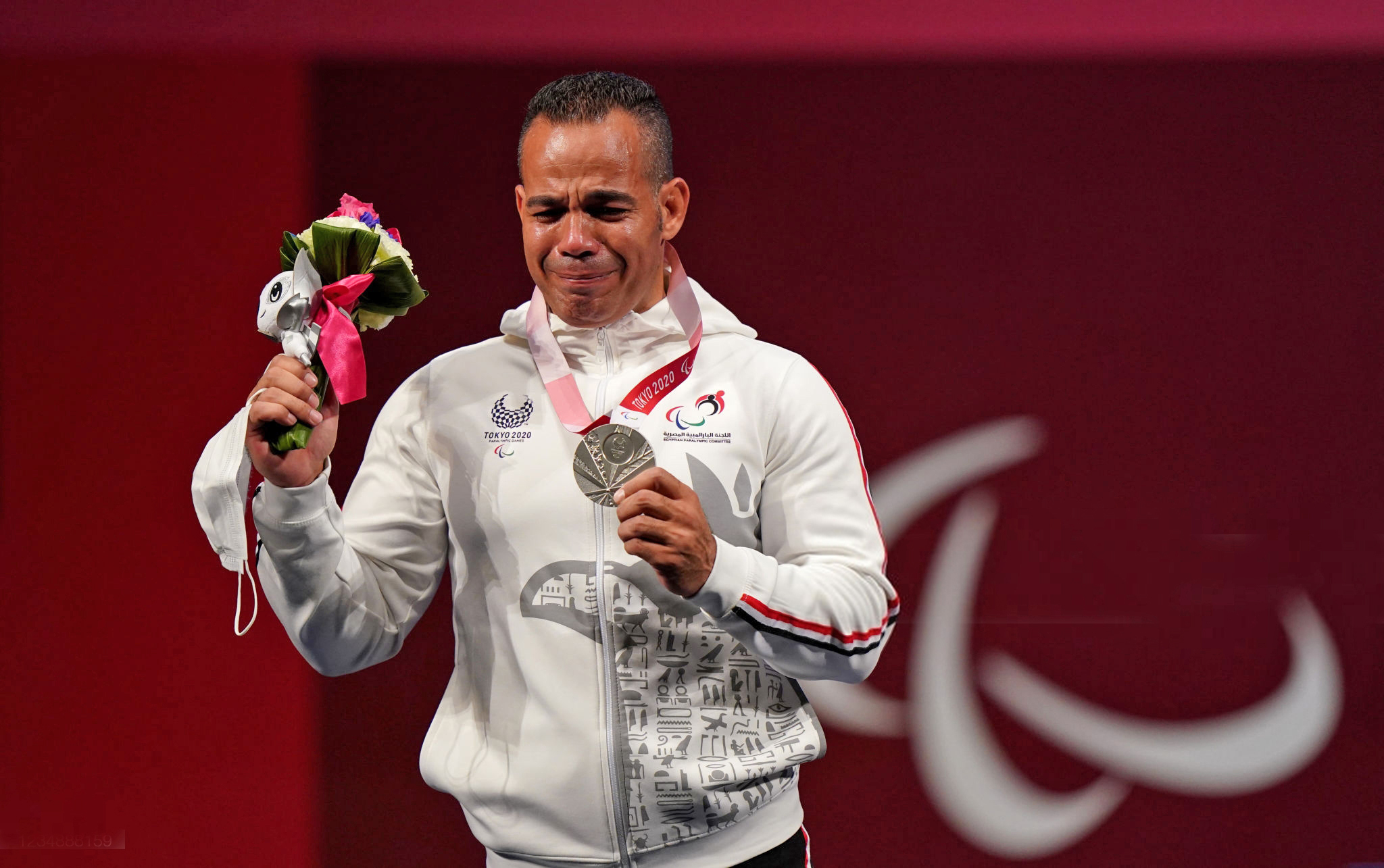 Sherif Othman won his silver medal in the 59-kilogram weight category despite being injured which prevented him from breaking his own record from previous participation in the Paralympics (211 kilograms).

This is Othman's first silver medal in his career, apart from three previous gold medals.

The 39-year-old, who holds an art degree in the Arabic language, plays for the "Telecom Egypt Club". He started in 2005 and his first coach was Mohamed Said Abdel-Hafez, and his current coaches are Abdel Moneim Salah and Emad Bahgat. He joined the national team in late 2005, played five World Championships, and three Olympic Games. "Tokyo was my fourth participation," he mentioned.

"Just like all athletes, I suffered from the coronavirus, it affected us all, preventing us from training for almost a year and a half. I was injured in my chest muscle; it was tough at the Olympics. I did my best but this injury deprived me of my beloved gold medal.

"We didn't have the chance to train enough and we understand this because of the challenges of Covid-19. Both the Ministry of sports and the Paralympics committee had done their best to provide us with all we needed according to the situation then. We wanted to travel for competitions and training, and they couldn't provide that because the world has been closed and sports activities were suspended.

"My toughest moment was while competing with my injury. I thought I wouldn't be able to lift the weights, but thankfully I did and claimed the silver."

Othman, who made his first call to his supportive wife, believes that an Olympic champion needs to love the sport he plays, have faith in himself, and work hard. He also thinks that Egypt needs to focus on the juniors and youth sectors to develop sports, as well as developing a plan to compensate retired or injured para-athletes.

According to Othman, President Abdel-Fatah El-Sisi has been very supportive of the Paralympic sports, as well the Minister of Youth and Sports, Ashraf Sobhy. "The warm reception and honoring were great, and a great incentive to work harder in the future to book a place at the Paris 2024 Paralympic Games," Othman concluded. 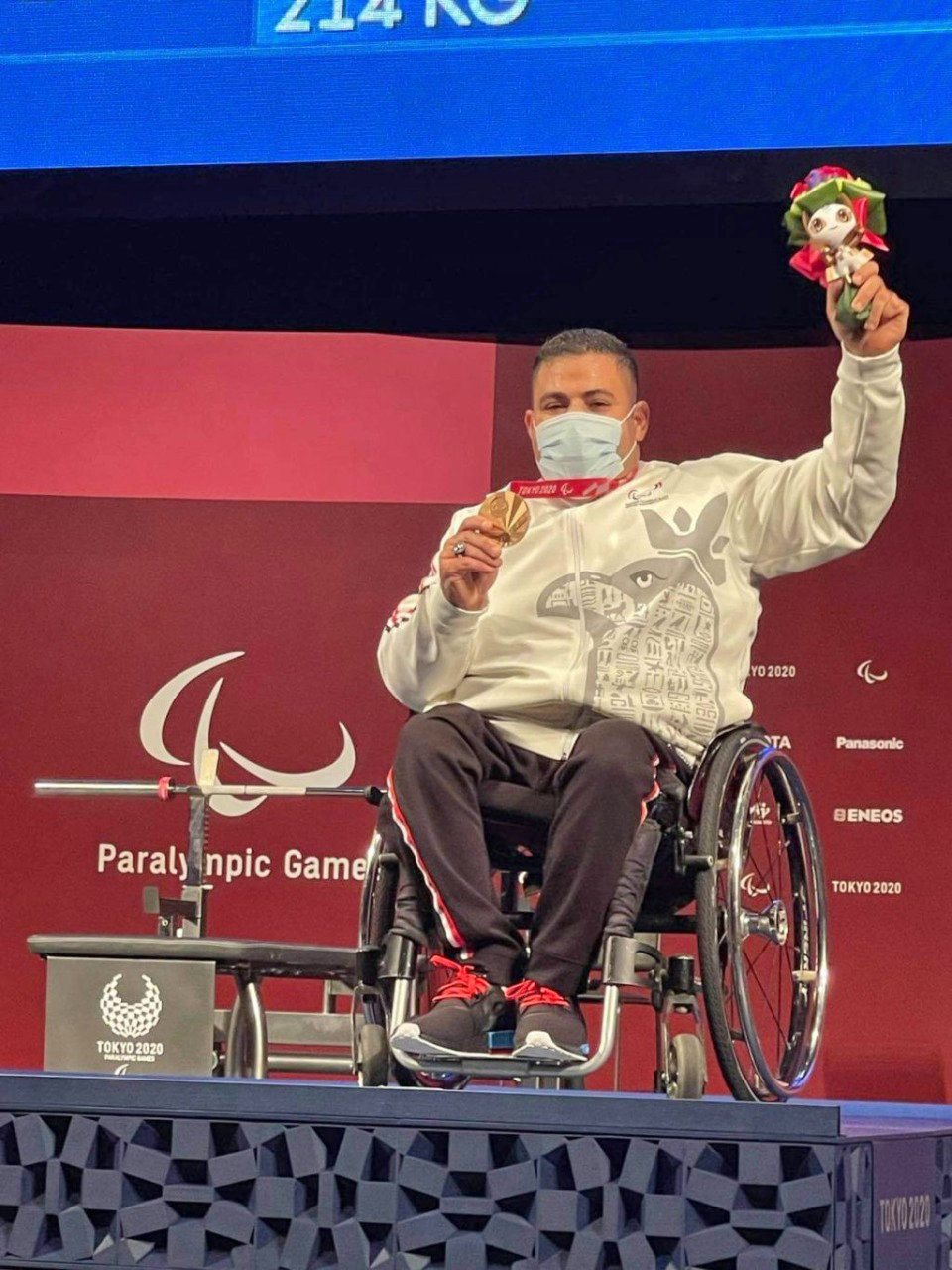 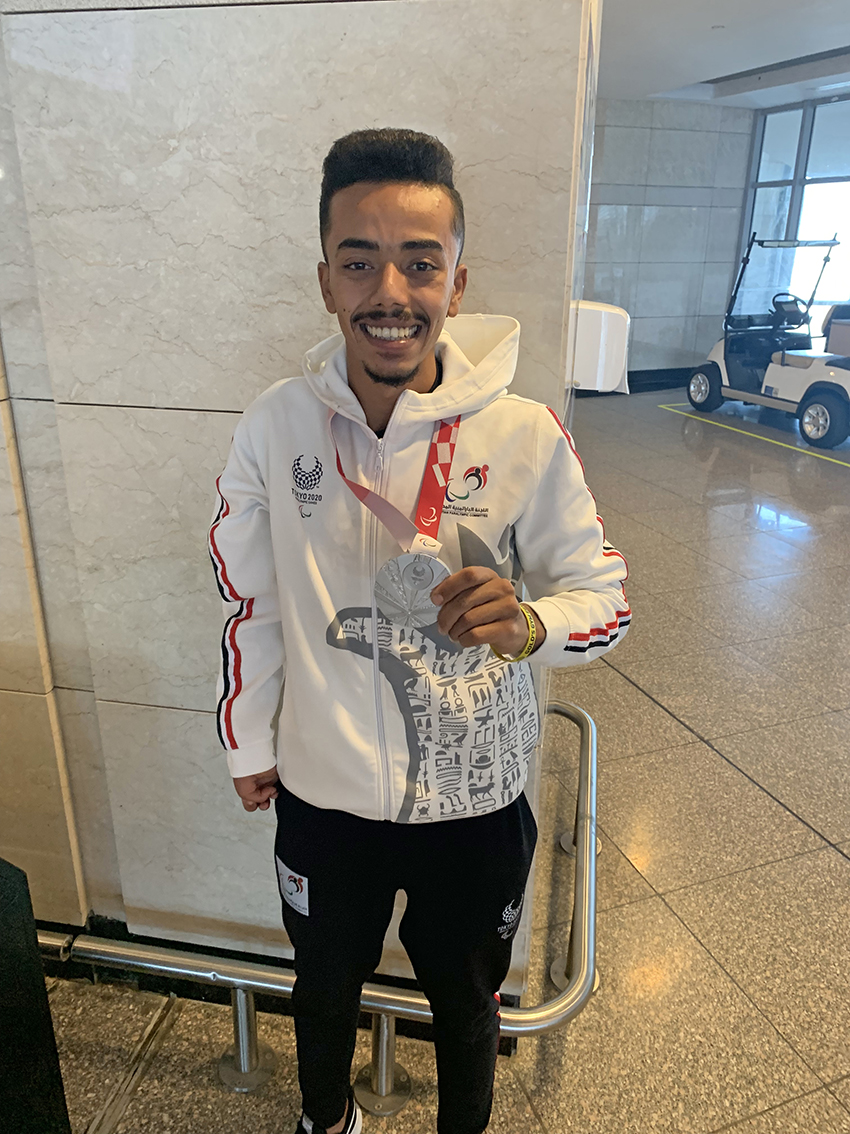 Mohamed El-Zayat was the only non-powerlifting athlete to win a Paralympic medal. He claimed a silver medal in taekwondo in the 61-kg weight category.

El-Zayat kicked off as a para-taekwondo athlete in 2017 at the “Gezziret El-Ward Club” in Mansoura, after being scouted by his first coach Hossam Kandel. "I can still remember his words five years ago, when he selected me and promised me that he would lead me to join the national team, and I eventually did." He has participated in several world championships, but the Tokyo Paralympic Games remains his biggest participation and his silver medal is his first and the most precious.

"I was too jammed and caught the coronavirus which didn't allow me to train well. But despite all those difficulties, the Taekwondo Federation has provided us with all the needed tools for our training, and I will never forget the words of the president of the Taekwondo Federation, Amr Selim, when he told me that he was sure I would win an Olympic medal. He had faith in me and believed I could do it, which was an inspiration to me that drove me to win. I also thank the Head of the Technical Committee at the federation, Ihab Gaber, and my godfather board member of the federation, Haj. Ahmed Soltan.

"My game against the Russian player was the toughest as he kicked me hard in my throat causing a bad injury."

The 22-year-old, whose first call was to his dad, feels blessed and thankful for all the support he received. especially from the Head of the State, the President of Egypt for the honors they received and the welcoming reception at the airport, and later at the Olympic Center by the Minister of Youth and Sports, Dr. Ashraf Soby. He also thanked the sponsors, including the National Bank of Egypt and Rawabt, "hoping to receive the same support as I get ready to warm-up from now to the upcoming Paralympic Games in Paris 2024. That's the new goal for me," El-Zayat concluded.

Egypt was involved very early in the Paralympic movement when Egyptians participated in the Stoke-Mandeville Games in 1954.

Historically, the Egyptian Paralympic Committee has invested in very few sports, including, in team sports: wheelchair basketball, football for the deaf, goalball, and seated volleyball. In individual sports, they have historically supported powerlifting, swimming, athletics, and table tennis. Archery, cycling, shooting, and lawn bowls are supported only on a national level, not the international level.

Throughout the years, since they started taking part in the Paralympic Games, the Egyptian athletes have won a total of 128 Paralympic medals, of which 41 were gold, 39 silver, and 48 bronze. Egypt has been particularly strong in athletics and powerlifting. 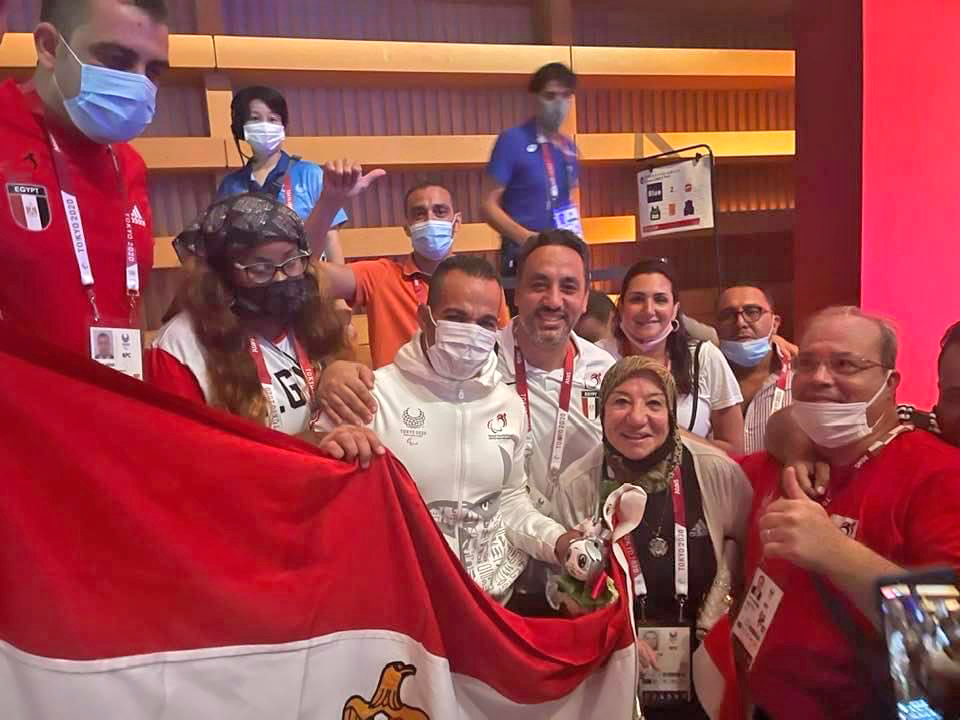 President of the Egyptian Paralympic Committee, Dr. Hayat Khattab, revealed that the challenges of Covid-19 and injuries were the main reason why some Egyptian champions have failed to defend their previous gold medals and claim the silver or the bronze instead.

"Though we have been aiming to achieve more medals than the seven we have ended with, yet, I am glad about the medals we clinched despite the current challenges and circumstances, and so proud of their performances and spirit of fighters," said Khattab.

The strict restrictions and precautions of Covid-19 had also negatively affected the training and preparations of the athletes. We couldn't go to training camps internally nor externally. We had the swimming team traveling to Italy to train and participate in competitions, but they had to return the following day because of the Covid-19 restrictions. Still, the athletes did their best to clinch those medals. Those who didn't win medals have also achieved top positions as they came in fourth, fifth, and sixth, which is quite an achievement in itself. Usually, the top eight in any sport are the best, so winning silver was a great achievement for them amid those circumstances," she said, adding that they were not happy with how refereeing went during the Games. "Refereeing was weird and the athletes and myself felt uncomfortable with that, and we believe it prevented us from winning four or five medals more at least," she admitted.

"Powerlifters, Sherif Osman, Rehab Radwan, and Fatma Omar have all claimed the silver medal, though they had previously won gold medals; and this is all because they got injured before traveling. Osman suffered a severe shoulder injury, and we were worried he wouldn't participate. But he insisted on competing, then cried when losing the gold medal, which he had won several times before, whether in World Championships or Olympic Games.

"Fatma Omar is a legend. She too was aiming for the gold which was always booked for her in any competition, but her injury this time made it hard to retain her gold medal," Khattab concluded.