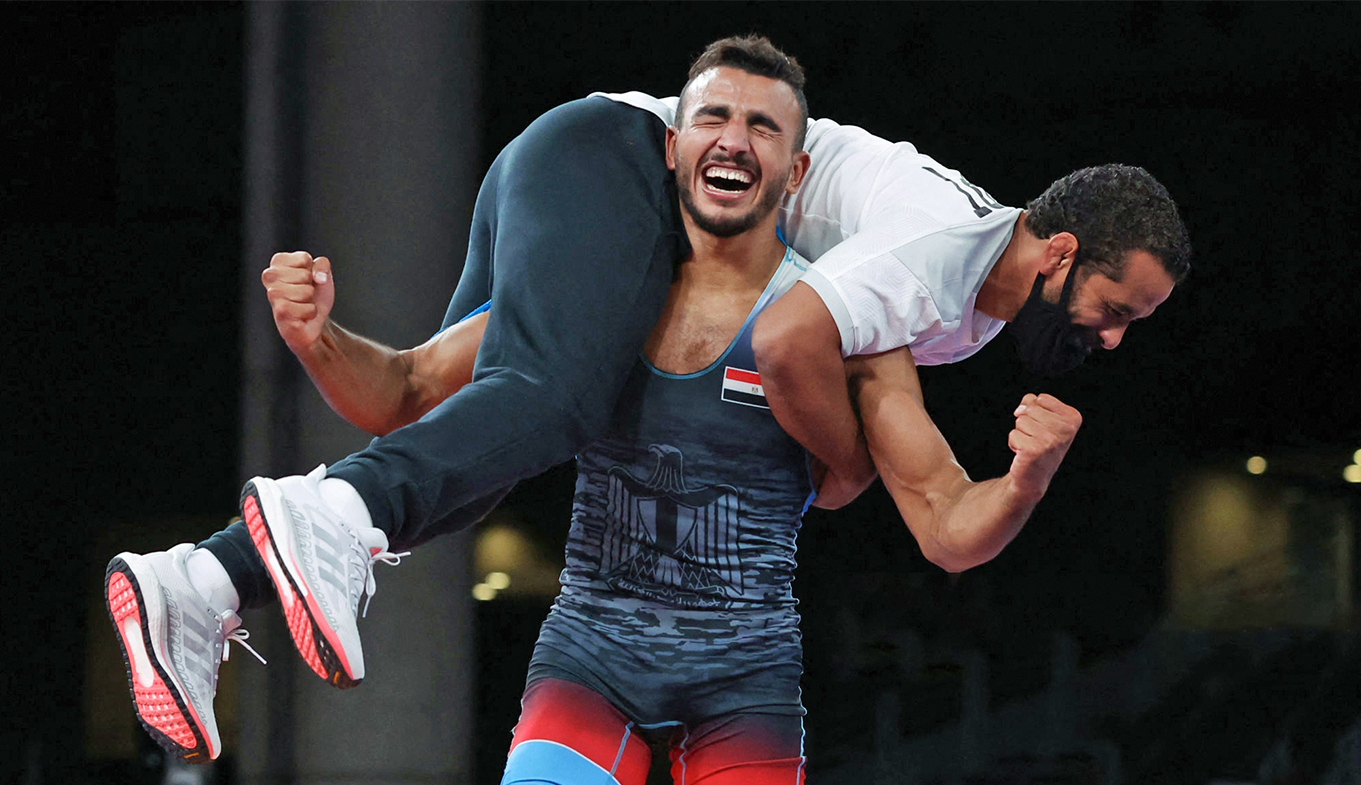 At the Tokyo 2020 Olympic Games, Egyptian Greco-Roman wrestler, Mohamed ‘Kesho’ Ibrahim, has fulfilled his dream of winning an Olympic medal, by winning bronze.

Though his dream was to achieve the Olympic glory by following the footsteps of his fellow countryman sport’s idol Olympic gold medalist Karam Gaber, yet he settled on the bronze, which is still a remarkable achievement that has engraved his name in the Olympic Hall of fame and sports history books.

The 23-year-old Kesho who competes in the -67kg category, is a student at the Arab Academy for Science and Technology (AAST). He started practicing wrestling at the age of six years old.

“At this age, I used to go to the Youth center close to my home in my spare time. One day, out of curiosity, I entered the wrestling hall and watched the players as they trained and played matches. I loved the sport and took the decision to play wrestling,” Kesho recalls.

The Tokyo 2020 bronze medalist, who plays for the Military Institution, revealed that his first coach was Ibrahim El-Saghir to whom he owes a lot. At the age of 16, Kesho joined the national team in 2014. A year later, he participated in his first U17 World Wrestling Championship, where he took his opponents by surprise and stunned the world’s officials as he went on to claim his first medal ever, the silver medal. And though he has won many other different medals since then, he admits that Tokyo 2020 is his best achievement.

“The Olympic Games bronze medal is the most important and my biggest achievement ever so far, in addition to my three gold medals which I have achieved in various world championships,” Kesho said, adding that the first people to congratulate him were his mother, his fiancé, the minister of youth and sports, and his sponsor, the Rawabt Company.

Kesho, dubbed by his coach ‘The Tank’ is thankful to President Abdel-Fatah Al- Sisi for honoring him and his winning colleagues by naming the bridges and roads after their names, which is an official recognition from the government of their achievements. 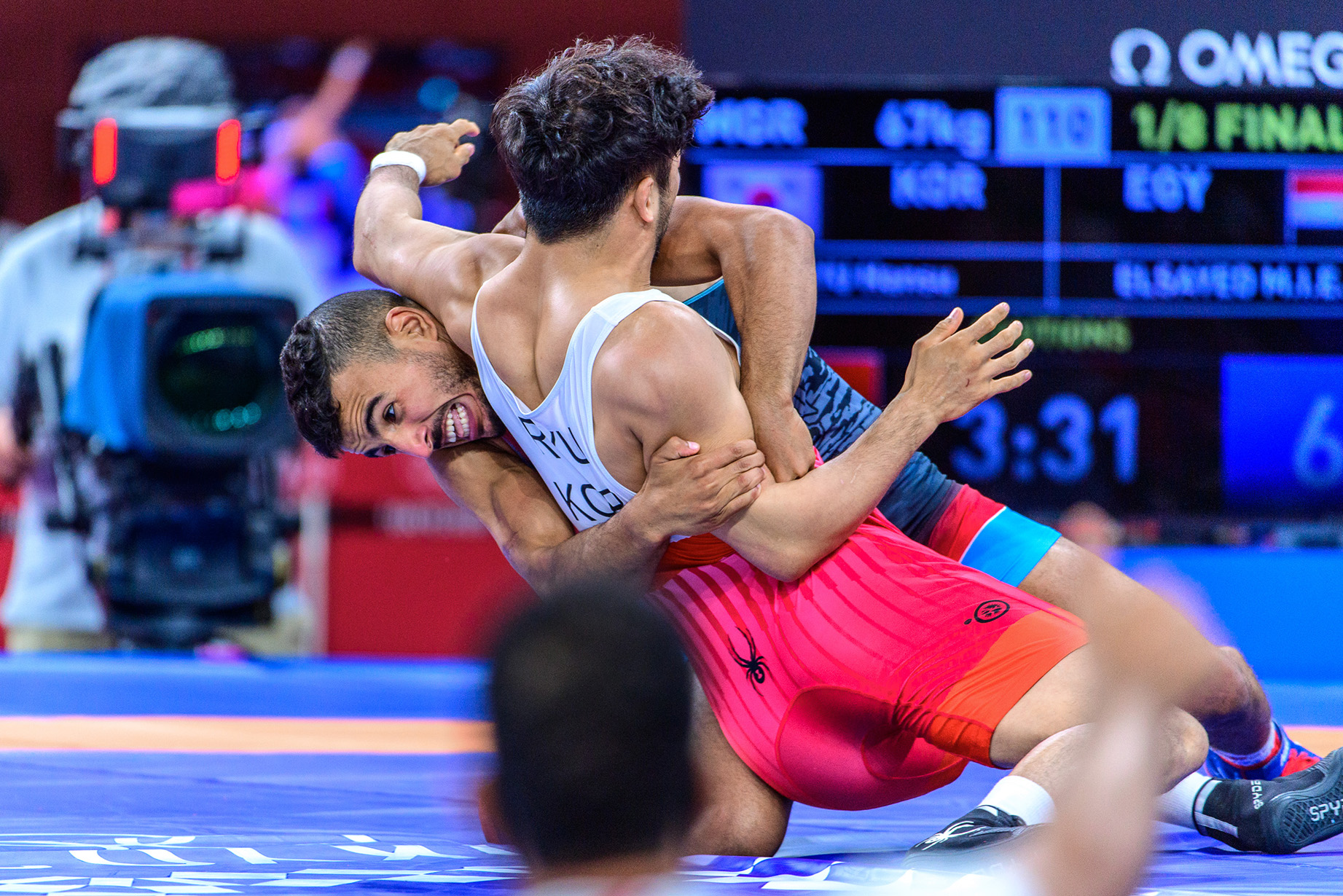 The Olympic champion, Kesho, opened up about facing some difficulties while building up for the Olympic Games. “The hardest obstacle was in my training in Egypt. I couldn’t find anyone to train with, I was on my own because the head of the federation separated me from my other colleagues. Though some officials tried to interfere in solving this problem, the situation remained as it is and I trained alone and managed to overcome these difficulties which emerged amid the challenges of the spread of the Covid-19 virus. All internal and external training camps were canceled. Luckily, I had the chance to train thanks to my sponsors; The National Bank of Egypt and Rawabt Sports Company who provided me with all facilities.

“I think that any wrestler who is preparing for a major sports event as the Olympic Games or the World Championship needs to have the chance to participate in training camps abroad and get the chance to train and play with foreign athletes because physical training is not enough to prepare the athlete. I wish I had that chance before the Olympics, but I couldn’t have this opportunity. However, I had faith in myself and believed I would win a medal and my coach supported me as well,” he added.

The mighty wrestler believes that the making of an Olympic champion requires sports officials to create the best environment for the elite athletes to train well and build up for major events, in addition to the support offered from the country, family, media, and the champion himself.

Kesho shares his toughest moments in the competitions at the Olympic Games. “It was in my second game when the referee voted against me and declared my opponent as the winner, but my coach objected to his decision and the jury voted in my favor, so I continued the match and managed to win in the end.”

Kesho, who became the first Egyptian, Arab and African to qualify to the Tokyo 2020 Olympic Games through the World Championship, appreciates the support of his family throughout his journey to success, encouraging him to maintain his passion for his beloved sport.

He also appreciates the media support and coverage throughout the Olympic Games before, during, and after the Games. “Actually, I didn’t expect it. There were some positive coverage and other negative ones that I ignored and preferred to focus on my competition instead.”

The Olympic champion has a piece of advice to athletes and champions aiming high and seeking the Olympic glory. “They have to maintain their will and determination, be patient, exert huge effort, and have faith in themselves.”

Finally, Kesho revealed that he is very ambitious as he looks forward to Paris 2024. “We will start working and planning right away for external training camps and participation in international events with hopes for another Olympic medal in Paris,” the bronze-winning wrestler concluded.